Chip Michalove is not your average charter captain, you could possibly call him the Great White whisperer. Michalove has loved fishing from a very young age and knew early on that fishing would become his career. Not only did Chip want to fish, but he wanted to catch the monsters, the Great White Sharks. Many people believe that the Great White Sharks in South Carolina don’t exist, but that could not be further from the truth.

In the video below, WJCL features Michalove’s record-breaking great white shark. This shark goes down as the largest Great White Shark to ever be tagged in the Atlantic.

Chad: “Chip how are you doing? Thank you very much for taking the time to speak with us”

Chip: “No problem at all! Just got in from a long day on the water and just getting home”

Chad: “So we have seen you on just about every news site there is, almost weekly it seems. Many of our readers are die-hard South Carolinians, and many have heard about you and what you do. We want to tell your story to our readers and a little about your background. So is Charter fishing your main line of work?”

Chip: “Yes my living is made from fishing charters and I go after Great Whites on my own time. I don’t make any money from the Great Whites, I take the scientist out and the same crew I have taking for years. I have never opened that side of my fishing up for Charters. We never harm the sharks, we strictly go after Great Whites for research and to protect them. Just about every time I catch a Great White it goes national so that is good for business.”

Chad: “So you said that you are into the conservation side of catching these Greats Whites in South Carolina. What is your main goal when you go out?”

Chip: “Originally my main goal was to be the first person to catch a Great White in South Carolina. I just wanted to see one, and then once I caught one it started making the news.  My pictures were making headlines. After the second Shark, I received an email from a big shark science and research organization in Massachusets. They said they could put me on a permit if I would use their tags. They said they didn’t have any data south of New York. So, of course, I said absolutely! Not long after I was on the permit, I caught one and tagged it. They then called me and ask if I could start putting satellite tags in these sharks, so next thing you know I am putting satellite tags in the sharks. We now perform a full work-up, we do a muscle biopsy, acoustic tags, a tag that shows what depths they go to, so really cutting edge technology. It’s a dream to go a mile up the road and get in my boat and see these Great Whites” 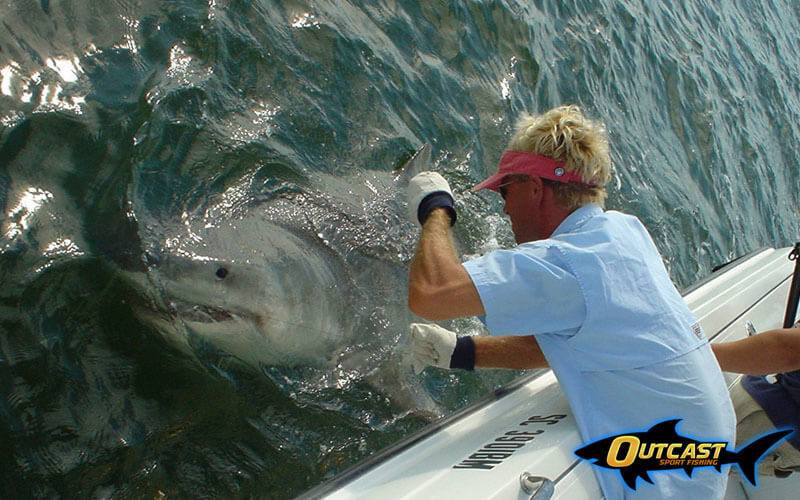 Chad: “Wow that’s amazing that you are doing this right here in South Carolina’s back yard! What would you tell travelers to South Carolina about the dangers of sharks? Do they need to be worried about Great Whites attacking them off of our coast?”

Chip: “The chances of getting attacked by a shark is hundreds of thousands to 1. Jaws is still embedded in our head 40 years later. I love the movie and the movie was relatively true, it’s based off some true characters, but there is really nothing to worry about here. Now if we were in South Africa or California, then ya I could see some concern. We have never had a Great White Shark attack here.”

Chad: “So if you’re out there catching these massive Great White Sharks in South Carolina, right off the coast, why do we not have attacks here?”

Chip: “If we have shark attacks here, they are typically bites from the blacktips. They are cruising the surf looking for food. Most of the attacks from Florida to South Carolina are blacktip sharks. There are 2 reasons we don’t have Great Whites coming into our beaches. Number 1 is we do not have seals, in cape cod they have a lot of seals and these sharks come into 3 or 4 feet of water after them. The second reason is our beaches are so far sloped out, in Hilton Head you can walk out so far and still be in 4 feet of water. Great Whites do not like the shallow beach areas but at times they do make their way into the sounds.” 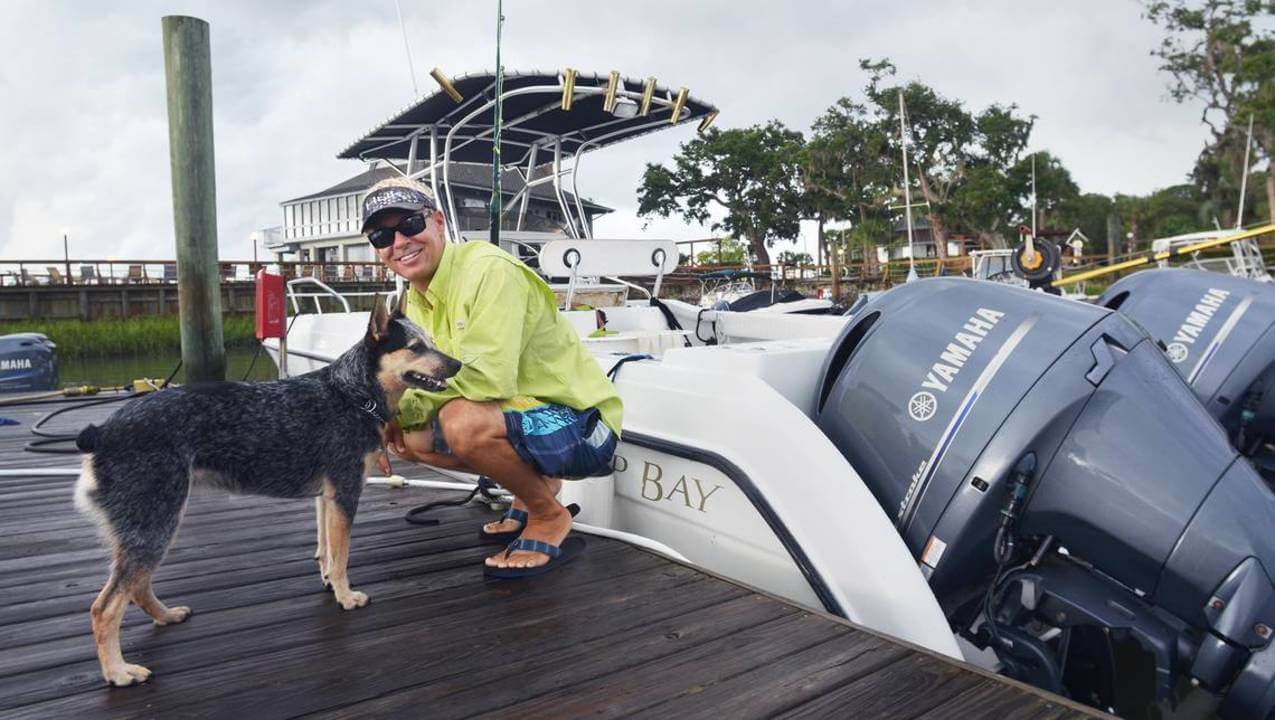 Chad: “So the Great Whites in South Carolina that you are catching, you think that is a small number in comparison to how many the Atlantic has?”

Chip: “When I first started fishing for the Whites, I thought there would be a just a few. Then we started catching them all the time. There is probably over a thousand out there”

Chad: “What about the shark apps where you can go and look at where the sharks are currently? Are these apps accurate”

Chip: “Many of those apps are not accurate at all. Some of the guys that are over those apps will go out for weeks and hook up on 1 shark. We can go out for a day and hook 7. Most of the sharks I tag can be tracked with an app called sharktivity. The number of sharks you will see on these apps is nowhere close to as many as there really is out there”

Chip: “Great Whites are one of the only sharks that have no fear. Whites are the only shark I have seen if you hook them and fight them for a little bit and they get away, that same fish will come back. Most species of sharks will not return if you lose them, Great Whites have no fear. Millions of years of evolution have taught this animal that they are the king of the water, with the exception of locations around the world that have killer whales.”

Chad: “So let me ask you, what made you want to get into this line of work? And how did you get to the level you’re at now?”

Chip: “I grew up doing this. When we would fish from the surf, all of my friends wanted to go catch redfish. I didn’t want to catch redfish, I wanted the 8-foot sharks. I was catching catfish and using them as bait to catch sharks at 12 years old. I was always obsessed with sharks, I knew there had to be Great Whites out there but I also knew nobody was really catching them. Once I figured out where the Great Whites were, it all came together for me. I would find a really good spot, then find a better spot, and recently the best spot yet. This past winter I found a place that is so good that next winter is going to be insane!”

Chad: “I have heard people ask the question, why do dolphins not get attacked by sharks? Is that true?”

Chip: “Well in the summertime they have an agreement with each other. The agreement is that they share the food around for the summer. When you have shrimp boats out in the water, you will see sharks and dolphin within 5 feet from each other. In the winter when the Great Whites show up, they will eat a dolphin. Some of my biggest Great Whites have been around pods of dolphin. You would see 20 or 30 dolphins go by and a few seconds later a Great White would pass.”

Chad: “That is interesting to know! So how did you get your first boat? We all know boats are not cheap.”

Chip: “That is a great question! I had nothing! I had no money, no education and no idea how I would get a boat. My girlfriend and I were living in this tiny little apartment and didn’t have much. I wanted a boat so bad and wanted to do this for a living. My family kept saying, no don’t do it, you can’t afford a boat. I went out and she helped me buy this boat, I took a loan out and have no idea how I even got this loan. I was taking friends out and just asked them to pay for fuel. I finally told my dad and he said he was sending me to sea school to get my captains license. So I started running charters shortly after. I felt so confident in catching sharks that I would guarantee an 8-foot shark or the charter was free. So I put an ad out with the little money I had with that guarantee and my phone started ringing off the hook. The rest is history!” 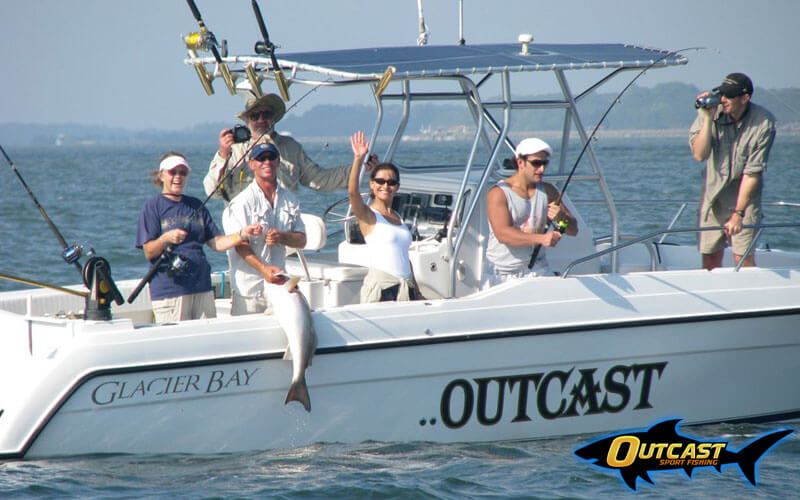 Chip: “The sharks have given me everything. My house, my truck, everything I have. I took a big chance and was not making any money in the beginning. I remember my dad telling me, Chip if you don’t start making money you’re going to have to move. You can move here and work for UPS, they have great benefits and decent pay. I remember telling myself, I am either going to make this work or I will be homeless I guess. I finally got over the hump where I could make it through the winter. You touched on something a second ago,  about people listening to everyone else. The thing is we are all born equal, but you have to be driven and focused. Many people can talk about what they want to do, that’s the easy part. The hard part is going out and doing it.”

Chad: “That is truly awesome. This story is about how you catch Great Whites and how you got to this point. At the same time, I think there is a much bigger message here. If you want something or have a passion for something, don’t just talk about it, go out and do it. That is the only way you will ever know if something will work or not. Thank you so much for your time Chip and happy fishing! I think we answered the question, are there Great White Sharks in South Carolina. ”

Wrap Up for Great White Sharks in South Carolina

What an amazing story from Chip Michalove. Not only is the story a very interesting read concerning sharks in South Carolina, but an inspiring journey. The big takeaway from Chip’s interview is although there are many Great White Sharks in South Carolina waters, the chances of being attacked by a Great White is almost nonexistent. We do have other shark species in the Carolina waters but your chances of a bite are still extremely low.

If you are interested in going on a charter with Chip and his company Outcast Fishing, all of their contact info is below.

More of our Lowcountry Stories

Top Things To Do In Charleston, SC